The world’s largest field hockey tournament will take place in The Palm Beaches for the second consecutive year this November. USA Field Hockey (USAFH) will partner with the Palm Beach County Sports Commission to host the National Hockey Festival at the International Polo Club in Wellington over Thanksgiving weekend, from November 23 to November 25, 2017.

Nearly 200 teams, consisting of approximately 4,000 athletes from the United States, Canada, Europe, and the Caribbean will visit Palm Beach County to compete in this one-of-a-kind event. The participating teams will contend for titles in women's and men’s divisions, including women’s age group (Under 12, Under 14, Under 16, and Under 19), boy's age group (Under 12), and women’s open and mixed (adult). Over 600 field hockey games will take place during the National Hockey Festival, creating an extraordinary volume of competition.

The National Hockey Festival generates a tremendous economic and tourism impact. In 2016, this event delivered nearly $8 million of direct visitor spending and over 11,000 hotel room nights.  Global JBS, the housing partner for USA Field Hockey, has assembled more than 40 hotels, located from Jupiter to Boca Raton, to offer housing accommodations for the National Hockey Festival.  Field hockey athletes, coaches, and spectators will be occupying hotels countywide.

Thanksgiving is about rituals, stuffed turkeys, and football.  However, the tradition is changing to include field hockey in The Palm Beaches. Don’t miss the National Hockey Festival, which provides a variety of festivities and a family-fun environment at the International Polo Club. The event is free and open to the public. The action starts Thursday, November 23  through Saturday, November 25 from  7:30 a.m. to  4 p.m. you do not want to miss this! For More information, contact the Palm Beach County Sports Commission at (561) 233-3180.

Check Out Highlights From The 2016 National Hockey Festival 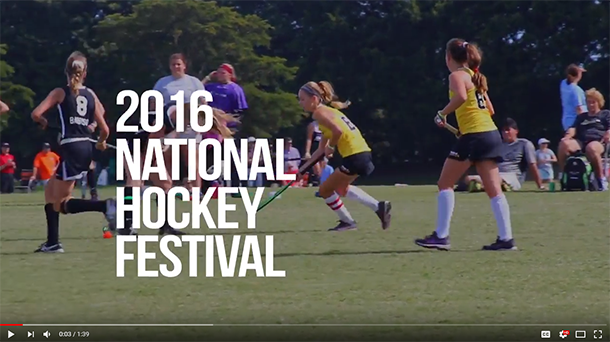